Most of the people that follow me these days know me as a spoon junky, but that wasn’t the case when I first started fishing some 12 odd years ago. It might be surprising to most people, but back in my beginnings, I reached for a fly rod every time I went out the door. For the first 3 to 4 years of my fishing career, a good majority of my time was spent chasing the elusive coastal cutthroat trout along the edges of rivers such as the Harrison and Fraser. Those days taught me patience, casting, proper presentation of a fly, proper drifts/mending, and how to read water.

Then I moved to the island in 2009. My first two years here were also spent fly fishing the various rivers for cutthroat (primarily), pinks, coho, chinook, and of course, summer steelhead – but then I slowly started branching out into pin fishing, especially in the winter months.

Then came the spoon – I became addicted to the spoon grab on my first trip ever to the fabled Thompson river in 2011, and decided to see if it would work on the island.

Now a days, I rarely find myself reaching for the fly rod in the winter months (although I still toss a lot of flies from May through till November). The steelhead on the island just had me captured, and a hard spoon smash is really, really tough to beat.

This year, I decided that I would try to branch out a little and discover new fisheries, hence why I called this series a “Winter Fishing Journal,” and not a steelheading one. With steelhead fisheries depleting rapidly all over the place, I want to give myself more opportunity now, and in the future. The cool thing about the island is that there are so many other steelhead, salmon and beach fisheries, that the trout river fisheries tend to be ignored. These particular fisheries can provide some pretty spectacular days.

This particular adventure started when a buddy of mine had told me he saw a school of 20+ large trout (all in the 18-20+ inch range) in a river last year while heading to a steelhead fishery. They tried catching some, but nothing ever committed to their hooks. I jotted down a quick note of that, and told myself that this year, I would be sure to go and examine the potential of this stream around the same time frame.

This year, I took a look every 5 or so days on my way to other rivers, right around the time that my buddies had seen them last year. Three weeks passed with nothing visible in any of the pools, but then the rains came. A few other rivers nearby would be fishing good for steelhead, so my buddy Mike and I headed out that way. On the way we stopped to take a look at the river, where to our surprise, one other angler’s vehicle was parked. In a span of 10 minutes of watching, this gentleman landed two cutthroat that were in the 20 inch range. They were here. While we didn’t fish that creek on that particular day, we had fun exploring another one close by:

Soon after (a couple days later), I went back with Kitty on a scouting mission of two creeks in the immediate area. Both of them had numerous, willing, large cutthroat. Our method of choice was simply tossing trout beads under an indicator on my new 3wt Rainshadow fly rod, but swinging small intruders also provided a lot of exciting grabs.

After catching numerous trout the first day with Kitty, I decided to pick the creek I liked most, where I would go explore the entire thing on my own from start to finish (falls to estuary). I tend to do these missions a lot when fishing is good, as the fish will often sit in the same pools year after year. Once you have them dialled in, you can simply return to the same stretches in the future to have consistently good days, and I was sure this river would be no exception. Over the next three days I hiked an absurd amount, covering at least 20 km of water. Along the way I found a bunch of really beautiful, “uncharted” waters, and got to see some beautiful sights.

I have to admit, walking these creek beds with a fly rod in hand felt incredibly good. It’s been a long time since I’ve put steelhead on the back-burner and  gone back to “my roots.” Hopefully in the future, I’ll be able to convince myself to do more of these days. I did have a great time exploring, filming, and catching these fish, so I’m sure it won’t be too hard to persuade myself to go again. Until then, I put together this little video of my adventures over the week of exploring the creeks this season – hopefully you all enjoy it as much as I enjoyed filming it and putting it together.

The Land of Giants – Video

I sincerely hope you enjoy the pictures and video. Any feedback is always welcome! There will be a couple of more blogs in this series for the winter season before I finally don’t have to ride ferries and write anymore! 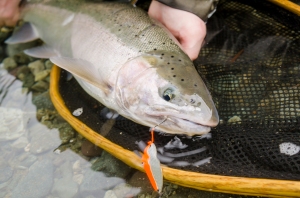 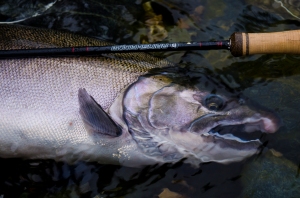 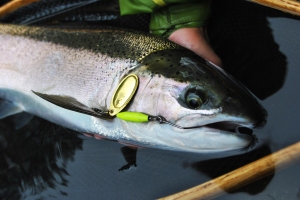 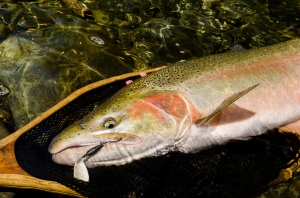